What a blessing and privilege to be allowed to raise my voice on this historic occasion, even though from across two seas, and address these words to you in my own home. You who are gathered here see this room, these walls and doors clearly, but I assure you they rise up before my eyes dimmed by the passing years, sanctified by memory and longing, and what comes to my mind is a nostalgic co-mingling of the past and the future. 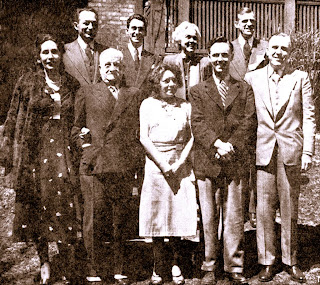 Strangely enough the most vivid picture is one neither I—nor probably one of you -- can remember as an eye witness: 'Abdu'l Baha addressing in this very room, a group of believers and guests. The strong, sad, wise face; the silvery hair; the beautiful, understanding blue eyes that swa the reality of things, the reality of evil, the reality of error, of failure and deviation, and yet looked upon all men with a loving and gentle spirit and filled them with hope, -- this is the first and most vivid imprint of all, which surely clings to this house so blessed by His presence. And what He said on that occasion must have for you, I feel, now gathered here to carry on His work at such an important juncture in Canadian history, a special message and a special significance. He opened his speech with these words:
"An hour ago a Young man came here and we discussed together whether nature is perfect or imperfect, light or darkness. I wish now to complete that conversation. Nature--that is, generally speaking, the physical world, the world of nature, if we observe it carefully and seek to probe its mysteries, -- this world of nature is seen to be imperfect, to be dark. Consider carefully: if we leave a plot of earth in its natural state it will remain a field of thistles, it will grow useless weeds; if we leave the hills to themselves the trees will remain fruitless, it is a jungle with no harvest, no order. Therefore, this world of nature is dark, it must be illumined. In what will its illumination lie?"

‘Abdu’l-Baha then went on to answer His own question and point out that cultivation and training in the world of nature has converted the wilderness into harvest-bearing fields, and that just as the physical world would, if left untended, revert to a state of nature which is dark, wild, and fruitless, so men, if abandoned to themselves, if left uneducated, revert to a state resembling that of animals -- nay, even worse than animals, for they can become like the cannibals of Africa, their human qualities of mind and soul remaining wholly undeveloped. Through one simile after another he pointed out that the physical world must be redeemed from its gross state of imperfection through training.

In that speech he struck at the root of the materialistic philosophy dominating the world at present. He said:

"In these days all the philosophers blindly say that the world of nature is perfect. They are not aware that it is imperfect and must become perfect through training." For, said He: "If we leave nature to herself she is dark, therefore we must educate man until this dark creature becomes illumined, this ignorant one becomes wise, boorishness becomes mannerliness, imperfection becomes perfection, bad character becomes good character; until this animal becomes a human. There is no doubt that man, untrained, is worse than an animal."

He went on, with caustic sarcasm, to point out that: "All animals are natural. All materialists have physical sensations just like animals. They have no spiritual sensations. They deny the existence of God, they have no information about Him, they have no knowledge of the Prophets, of the Kingdom of Heaven, they know nothing. All animals likewise, are without tidings of the Divine Teachings. All animals are the slaves of sensation. In truth, the philosophers of this age are like animals because these too have no knowledge of God, of the Prophets, of spiritual perception of the outpourings of the Holy Spirit, of supernatural things. Every animal enjoys such perfections as these. With the greatest of ease philosophers, after twenty years of study, deny God, deny spiritual power and divine inspiration. Animals, without taking any trouble, are perfect philosophers, like Her Highness the Cow, who knows nothing about anything. She knows nothing about God, she knows nothing about spiritual perception or spirituality. All animals know nothing of the spirit. These philosophers, likewise, know nothing except physical things. They are like animals. But in spite of this they say we are philosophers because we acknowledge nothing but that which we perceive. Now Her Highness the Cow, without the acquisition of all these sciences, yet with perfect dignity, is the possessor of these same distinctions. This is not glory! Glory is that man should know of God, should be the possessor of spiritual sensations, should be informed of supernatural things. The glory of man is in this that he should inhale the breath of the of the Holy Spirit. The glory of man is in this that he should imbibe the Divine Teachings This is the Glory of man, otherwise, ignorance cannot be glory, it is foolishness, ignorance is foolishness."

He then pointed out that Jesus Christ was obviously in every way superior to philosophers in His wisdom, His conduct, and convictions, why should a being like Him accept to forego the honours, comforts and pleasures of this world if He was not convinced that there was a spiritual condition which conferred infinitely greater benefits on man than the world of mere senses ever could?

It was during the course of this lecture that 'Abdu'l-Baha became so engrossed in His subject, and spoke with such vehemence, that His turban fell from his head and rolled on the floor. He voiced His protest, here in this room 46 years ago, against the materialistic philosophy of the West which has gradually engulfed the thinking element of mankind, and which, if it has not directly produced, has certainly not hindered two catastrophic wars and is now facing us with the appalling possibility of a third world war.

It seems befitting, singularly befitting, that you-who are now about to have the spiritual destiny of this beautiful and promising land of ours entrusted to your exclusive care, through the election of your first and own National Assembly-- should harken again to the Master's words and realize the true implications of the responsibility you are assuming of playing a direct part in ushering in a spiritually based civilization as opposed to our highly faulty, purely materialistic civilization of the present day. For we

Baha'is must not forget for a moment that, without any mental arrogance or conceit, we nevertheless believe our concept of nature, of the purpose of life, and of God, to be inherently different from that commonly held and based on a true interpretation of evolution and of the universe.

You nine people, whoever you may be who will have the privilege of humbly serving the rest of the Canadian Baha'is as the trustees of the national affairs of our Faith in Canada during the coming year, are now opening a new door. Not only new to you, but new to the entire Baha’i world. This Canadian Assembly has great significance from many standpoints: it adds one more National Assembly to the small but strong group of national bodies already existing; by being loosed from its spiritual twin, the American National Assembly, it creates yet another pillar of the International House of Justice, and it forms, significantly enough, the ninth National Spiritual Assembly to come into being.

Now that your affairs are being entrusted to your own hands, now that you are opening this new door spiritually, you are likewise being given a new opportunity as Baha'is and members of our world community. You can go very far. A new area of work in the New World is being born amongst you. God surely never creates great occasions without likewise conferring great capacities and powers. You, profiting by past experiences and example and your maturity in the Faith, can determine to create your National Assembly and its functions closer to the Divine pattern, more dedicated to its noble purposes, more purified of the dross of selfish shortcomings and limitations than any other Baha'i body hitherto constituted. For you are free and this is the morn of your work, you come to your task fresh, exhilarated by the Guardian's bright picture of your future possibilities and the important role you must play.

Whenever one thinks of Canada one thinks of cultivation. Out of her virgin forests, her wildernesses, her barren North lands and lakes, has already been wrung a great and promising nation. The darkness of nature, as the Master said, has given way to cultivation and out of imperfection has risen the splendour of government, industry, trade, settlement, and the arts and sciences of human life. But spiritually the land is still dark, promising, but dark. Primarily the measure of spirituality radiated by your national body will be the measure of Baha'u'llah's life directly available for Canada. For He created the concept of your institution. You exist because of the functions He desired you to perform, and your fundamental function is to be the spiritual heart of Canada. I say spiritual advisedly, for we all know from now on you are the administrative heart of the Baha’i work here – but that is negligible compared to your spiritual position. You are elected to lead, at a fast and valiant pace, let it be said, the united efforts of the Canadian Bhai’s, and however great the capacities of various individuals within the community may be, it is unlikely they can do more than you provide for them to do. Upon your vision, your dedication, your eagerness and reliability, rest the fortunes of the work of the Cause of God in Canada. You are the first servants in the land, servitude being the highest station as 'Abdu'l-Baha demonstrated by choosing it for himself, and your responsibility to the people of this Dominion is thus very great.

Unfortunately government in the world today, even in the so-called democracies has come to be domination from above. The original ideal of a representative form of government whose members are the servants of the Nation, of the common man and of the common good, a government "of the people, by the people, for the people" has disappeared and in its place too often we see the esconced handful of public servants looking upon themselves as superior class, free to dictate to the masses just about what they please. Only at election time is there a rapid volte face in order to secure a prolongation of their own privileges -- not a prolongation of humble service to the public weal.We see in the world to-day the governing and the governed as almost separate forms. The elders of the community, the shepherds of the flock, those whose constant thought should be for the welfare of each and every individual, who should be accessible to the public, if not in person then at least in thought, have become a self-inflated, self-righteous, haughty minority. This is in the world where democratic forms of government are still in practice.