A Symbol of Victory -- excerpts from Address by 'Amatu'l-Baha Ruhiyyih Khanurn at the World Congress, May 2, 1963 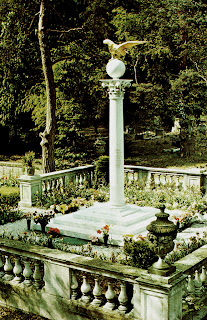 Now we come to our beloved Guardian's grave and his passing. I don't want to go into detail about that because it will shatter me and I really can't bear thinking about it at this moment. But after I had gone out and visited his grave the day after his funeral, as I drove away -- it was very strange because I had no mind left, or anything at that point -- I saw before me in my mind's eye a column, and a globe, and an eagle, and the steps underneath it --the whole thing. And when I went back to Haifa and the Hands of the Cause met in such tragic circumstances with such broken hearts, in the Mansion of Baha'u'llah in Bahji, I showed them a little sketch and they were happy with it and approved, and that was what we built over Shoghi Effendi's resting-place.
Shoghi Effendi always wanted a column. And, well, he got it, evidently. But every time he saw a beautiful column: -- you know, Rome has very beautiful columns; sometimes when we passed through Rome in the old days, before there were so many Baha'is there, he used to look, and he would say, "You know, I think these columns are so beautiful. Where can I put a column on Mount Carmel?" "Well," I said, "Shoghi Effendi, I don't think you can, because you can't just stick a column up like that, you know; where would you put it?" And, well, that was that. But he didn't have a column, and he wanted one. And then he liked the Corinthian style very much. And so I think that perhaps influenced my thought that we should have a column, because he always wanted a column so much. And in the end he got one.

And then came the question of the eagle over Shoghi Effendi's grave. When he began to buy those eagles as ornaments for the gardens and put them up, and we asked him why, he said it was a symbol of victory, and that the Baha'is now all over the world were beginning to have their victories. . . . . That was why he wanted to have an eagle in the gardens. So, I thought, what greater place to put the symbol of victory than on top of Shoghi Effendi's column, on top of the globe of the world, with the continent of Africa -- which at the end of his life had already begun to show such promise and which had caused him so much joy -- facing out! And we thought, what eagle shall we use? And then I remembered that he had bought an eagle and had it in his room. And again the Japanese friends must be very happy: it was a Japanese eagle, made in Japan ... very, very beautiful.

As you have seen from visiting his monument, it has one wing folded and one wing out. It's very hard to tell: -- is the bird taking off, or is the bird alighting? So, one night I brought it down in Shoghi Effendi's home, and got someone to hold it up in the corner. Millie Collins and I looked at it and we thought, this is the perfect eagle for Shoghi Effendi's grave.