When I was in Prague, Czechoslovakia, in 1927, I met the secretary of Count Leo Tolstoy, Mr. Valentin Bulgakov; we had a long talk about Count Tolstoy and his contact with the Baha'i Movement. Later, in December, 1930, I met Miss Alexandra Tolstoy, the youngest daughter of this great Russian writer and humanitarian. She said to me then, "What Mr. Bulgaliov has told you about my father's interest in the Baha'i Movement is true. He was with him during the last four years of my father's life; he was his secretary and arranged his library." Then, too, I corresponded with Mrs. Isabel Grinevsky of Leningrad in 1927 and she wrote me about Count Tolstoy.

It is through these kind friends that I have the facts for this article. An added interest was given to the subject for me when only a few days ago, May 3 1, 1932, I interviewed the president of a Roman Catholic university in Poland who had met 'Abdu'l-Baha in 1914, in Haifa, Palestine. 'Abdu'l-Baha said to him that there was no greater writer in Europe than Count Leo Tolstoy. "What a pity that Tolstoy, who so admired the Teachings of 'Abdu'l-Baha, never had the privilege of meeting Him."

"Count Tolstoy knew the Baha'i Teachings through literature. I think he did not know any Baha'is personally," said Mr. Bulgakov in his talk with me. "He first heard of the Baha'i Movement in May, 1903, when Mrs. Isabel Grinevsky brought out in Leningrad (the former capital of Russia that then was called St. Petersburg) a great drama called Báb; it was in verse and gave the illumined history of the Forerunner of the Baha'i Movement, a young man called Báb and His disciples called Letters of the Living; the scenes were laid in Persia. This drama was played in one of the principal theatres of St. Petersburg, in January, 1904, and given a remarkable reception. Some of the critics went far in its praise. For example, the poet Fiedler (who afterward translated the drama into German) said: 'We receive from the five acts of the poetical drama Báb more information about the Baha'i Movement than from the deep, scientific researches of Professor Edward G. Browne, Gobineau and Russian scientists and historians. As the Herold has already published two full feuilletons about the poem, we shall speak only of the performance of the play. Rarely has the renown of any play preceded the performance as has this of Mrs. Grinevsky.' "

The Herold of January, 1904, printed the following:

"The drama appeared in May of last year, 1903, the most inconvenient time for the coming out of a book, but nevertheless pens of critics began to move in the journals and magazines in praise of the author's work. Moreover, enlightened Persian society sent an inspired letter of thanks; and above all Isabel Grinevsky had the high spiritual satisfaction that among those who praised her drama was the lion of contemporary Russian literature, Leo Tolstoy."

Mr. Wesselitzsky, a Russian journalist and president of the Foreign Press Association in London, gave an address about this drama Báb in London, in English and the lecture was published in pamphlet form in French and English. I quote one paragraph from this speech: "Amidst the sorrows of disastrous war and those dreadful inner troubles that book, Báb, was my only happy impression and it has remained since a permanent source of joy and comfort as a manifest proof of the vitality of Russia and its creative genius."[1]

"Count Tolstoy read this drama Ba'b with great interest," Mr. Bulgakov told me, "and sent a letter to Mrs. Grinevsky praising her work and telling her he was in sympathy with these teachings of the Baha'i Movement." His letter to her was published in the press of Russia. Mrs. Grinevsky also wrote me about this letter from Count Tolstoy which she has preserved.

Next Count Tolstoy read a booklet by Mr. Arakewian that described further the history of the early followers of the Báb and gave a short account of the teachings. He studied it with eager interest, his secretary told me, and sent a copy of it to one of his friends, Mr. Boulanger, who was writing a book about all religions. Count Tolstoy urged Mr. Boulanger to include a chapter on Baha'ism in this new book. Unfortunately the book was not published before Count Tolstoy passed on, then came the World War and it was never printed. "Count Tolstoy's heart and soul were in all universal movements like the Baha'i Movement that aim at the unity of all mankind," said Mr. Bulgakov. 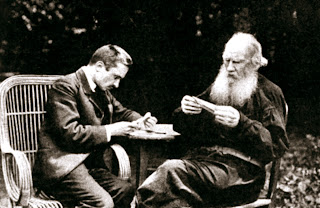 He also told me that Count Tolstoy read with deep appreciation the book, "The Voices of the People" by Ivan Nagivin, in which the author writes much about different religions, the old Christian sects in Russia, the Indian Religions, and about Baha'ism. Tolstoy liked this work because it opposed militarism and all fighting and stood for universal peace. He gave copies of this book to several of his friends, sending them from his home in Yasnaya.

When I asked Mr. Bulgakov if Count Tolstoy had Baha'i books in his library, he replied: "Certainly, he had Baha'i books in several languages. After he had read the drama Báb and knew of the Baha'i Movement, he sent and bought what books he could get. I remember a picture in one of the English books -- a picture of a young man who looked like Christ, and was the Founder of this movement."

The secretary said that Count Tolstoy had studied the Bibles of all religions profoundly. As one of the principles of Baha'u'llah is a universal auxiliary language, I asked the secretary what Count Tolstoy thought about such a language to help promote world peace, and quickly he replied: "He thought it was very important, and when he heard for the first time about Esperanto he was so delighted that he took an Esperanto grammar, studied it two hours and wrote a letter in Esperanto! He was then about seventy years old. He knew many languages, Russian, English, French, German, Italian, Hebrew, Greek, Latin."

Count Tolstoy, I feel, was a Baha'i in spirit, for the word signifies in the Persian language "Light-bearer," even though he heard of the Teachings late in life. He was born September 10, 1828, and so was nearly seventy-five when he first learned through the drama Báb of this universal religion for peace which had its rise in Persia about the middle of the nineteenth century. He passed on November 10, 1910, but in one of his last writings, I hear, he penned these words which will be read not only by this generation but by millions yet unborn: "We spend our lives trying to unlock the mystery of the universe, but there was a Turkish Prisoner, Baha'u'llah, in 'Akka, Palestine, who had the key!" (Martha Root, The Baha’i World, 1932-1934)


[1] Taken from a pamphlet, the speech delivered by Mr. Wesselitzky, President of the Foreign Press Association of London, published in French and English, London, 1907, at the press of "Chronide,” 29 Besborough Street, London, S. W.