'Abdu’l-Baha and the Rabbi – by Willard P. Hatch

The dynamic address of ‘Abdu'l-Baha at the Temple Emmanu-El referred to by the author in the following article, was published in full in "The Palo Altan" of Palo Alto, Calif., together with His vitally important addresses at Stanford University and the Unitarian Church in Palo Alto. They were later published in the book of His addresses in America, "The Promulgation of Universal Peace." 'Abdu'l-Baha said that the Baha'i Teachings are the "principles of action," and that "When practical activity has been manifested, the teachings of God have borne fruit." The story as printed below shows how Abdu'l Baha's Word was His sword, and "the power of God His victory."

Temple Emmanu-El, the synagogue of the reformed Jews, at 450 Sutter Street, in downtown San Francisco, was packed to overflowing. By sitting on the floor in the balcony, the writer was enabled to both see and hear.

On the rostrum was a scene such as reminded one of a painting of ancient times. In turban and flowing, camel's hair robe the sage of divine wisdom, His Holiness 'Abdu'l- Baha was speaking; the Spirit that accompanied His luminous Persian periods was so powerful that attention was intensely centered upon Him; to such an extent that the fact that His words were interpreted became inconspicuous and was completely lost to consciousness.

'Abdu'l-Baha was proving with unanswerable logic that religion was the great cause of the progress of a people. "Religion confers upon man eternal life," He said, "And guides his footsteps in the ways of morality. It opens the doors of unending happiness and bestows everlasting honor upon the human kingdom. It has been the basis of all civilization and progress in the history of mankind." He illustrated His point by the incidents of the Abrahamic family and the succeeding minor prophets of the Jews; by their well known history and slavery under Pharoah; their rescue by the great Prophet Moses, Who was known as a shepherd by the Egyptian people; how, by the power of religion, He was enabled to establish such divine foundations as resulted in the glorious civilization of Solomon. He showed that He meant by religion "the essential foundation or reality of religion, not the dogmas and blind imitations … These are inevitably destructive and a menace and hindrance to a nation's life… When they forsook the foundations of the law of God, Nebuchadnezzar came and conquered the Holy Land… seventy thousand Jews were carried away captive… Under the Roman general Titus 70 AD, the Holy Land was stripped and pillaged."

Then with impressive majesty the mighty 'Abdu'l-Baha pointed out that religion was divided into two parts; an essential part, identical in the teachings of all the Prophets; a secondary part which each Prophet changes according to the needs of the people of His day -- that the foundations of all religions are one as Truth is one. 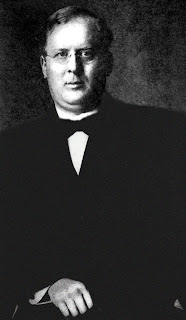 Then the tide of the ocean of the address of 'Abdu'l-Baha deepened, as He powerfully demonstrated that His Holiness Christ was the greatest friend of Moses: that He promulgated the validity of Moses, unknown previously in India, or even to neighboring Europe; that, by the Gospel and its acceptance of Moses and of all the Israelitish prophets, He successfully upheld the Torah; that the Christians lost nothing by accepting the Old Testament; that Christ was the Son of a Jewish mother, and naturally the friend of the Jews.

The scene was dramatic. The young, highly intelligent, and somewhat heavy set Rabbi wiped the perspiration from his forehead, although the autumn day was not warm. Not a Jew objected.

Then, briefly, the wonderful 'Abdu'l-Baha showed that the Prophet Muhammad was the upholder of Moses and Christ; that, although “outwardly illiterate and uninformed of the Holy Books of God," yet He promoted a civilization from barbaric Arabic material, that extended through the Arabic countries to Spain and greatly influenced European education. It was the quarreling followers of these great Prophets who diverted from the Message of the Founders of their religion and swept into mutually accusing fanaticism.

Then Abdu'l Baha made it clear that He accepted Moses, without detriment because of such acceptance, and that, in a like manner He accepted all the Prophets -- stating that Baha'u'llah, "the Founder of the Baha'i Movement" commends such an attitude and says that "to be unprejudiced" promotes the welfare of mankind.

Profoundly moved the huge audience poured from the synagogue out upon the street and slowly dispersed to it's respective homes.

Now ONE OF THE immediate sequels to this incident is most interesting; for that it was a sequel in point of time all will agree, the fact is indisputable; that it was also a sequel of cause and effect the writer firmly believes; certain it is that no effect occurs without a cause, that is clearly self evident however, the reader may judge for himself.

It was not long after the above incident that the directors of the Congregational church, located on a corner diagonally across the street from the synagogue, determined to build a new edifice on the same site as the old; this necessitated the tearing down of the old structure, before the erection of the new one, and left a Christian congregation without a place in which to worship. At this juncture the revered Rabbi of the synagogue, in which 'Abdu'l-Baha had proven the validity of Christ with irrefutable arguments, by name Rabbi Martin A. Meyer, -- may his spirit rest in peace, -- with complete freedom from prejudices which had prevailed between Jew and Christian for an agelong period of time, cordially invited this homeless Christian congregation to worship each Sunday in the Jewish synagogue.

This generous invitation was accepted, and for a period approximating nine months thereafter, each Friday the Jewish services unfolded the Old Testament, and each Sunday the Christian services discoursed upon both the Old Testament and the New.

Now when or where, since the time of Christ, had such a thing ever taken place before? True it is that union meetings between the adherents of different religions, including Christian and Jew, have at various times been held before -- and at the World's Fair in Chicago in 1893, where the great Baha'i Cause was first mentioned in America, many different religions had held a congress conducive to better understanding; but when, in previous history, had such an unheard of thing ever occurred -- that week after week, Sunday after Sunday, for months, a Christian congregation should worship, by invitation, in a Jewish synagogue?

When informed of this event His Holiness 'Abdu'l-Baha wrote, in a Tablet, as follows:

"Regarding the magnanimity and humanity shown by his honor Rabbi Martin A. Meyer in offering his synagogue to the Christians so that they may worship therein, -- this action and this deed will become eternal, and in the future ages and cycles, the good intention of the Reverend Rabbi will be recorded in the books and works of universal history and will be on the lips of all men without end."

This message the writer conveyed to the Rabbi, seated one day in his study at the synagogue, and he became very happy therefore.

The body of Rabbi Martin A. Meyer has gone to its last resting place; that his soul may attain to ever higher stations, is the fervent prayer of those who knew and loved him -- this unprejudiced, noble-hearted gentleman; true friend that he proved himself by deed to be, and real lover of the One God and humanity -- that One God from whom all mankind originates and to whom all mankind returns. (Star of the West, vol. 20, no. 4, July 1929)