Evolution of the Baha’i Community -- by Emeric Sala 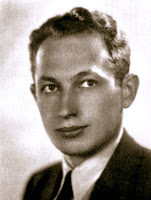 [Emeric and his wife, Rosemary, were elected to the first National Spiritual Assembly of Canada in 1948, and they continued to serve with distinction until 1953. That year they responded to the Guardian’s call for pioneers at the beginning of the Ten Year Crusade] (The Baha’i World 1986-1992)

Father- or hero-centeredness is the inevitable process of growth for every adolescent and for every evolving community until maturity is reached. The Christian community was essentially father-centered around the personality of Jesus Christ. The minister of many a Christian community is still addressed as father. Kings and saints often filled the need of a father image. If we go back to an earlier age we find the patriarchal society as the established pattern. Among the Bantus even today the proper way to address an older man is baba, which means father.

For the last six thousand years leadership meant individual personal impact. Until recently it was assumed that leadership, and for that matter any accomplishment requiring skill and knowledge, let alone judgment, could come only from the individual. An organization, we assumed, could perform only simple, repetitive, regimented work.

It is only since the early half of this century that we can discern a trend of leadership from king, minister, and judge, to parliament, cabinet, and council. The large business organizations are no longer built or run by one man. Great decisions are increasingly entrusted to the interaction of many minds in the form of a commission or board. Even our greatest inventions today are the result of the working together of many minds.

The early believers who accepted the Baha'i Faith were conditioned in a father-centered environment. It was natural and inevitable that those who had met Baha'u'llah should have established the personal relationship of disciples to their Lord. Later, when the center of authority was transferred from Baha'u'llah to 'Abdu'l-Baha, the believers again turned naturally and inevitably to 'Abdu'l-Baha as to a father and called Him, against His wishes, Master.

The relationship between master and pupil, or father and son, is necessary and vital to growth. Nevertheless, a great stride is made towards maturity when the son leaves the father or when the father leaves his son. 'Abdu'l-Baha told His disciples not to sorrow at His passing, since He would then be able to help them more than before. And yet we know that many of the believers were heartbroken and stricken for a long time after, instead of realizing that the passing of 'Abdu'l-Baha marked a new stage of development, opening up new opportunities for service and growth.

As a result of a conversation I had with Shoghi Effendi in 1938, I have been asking ever since on both hemispheres, at firesides, summer schools, and conferences, the following question: What was to succeed as the center of authority after Baha'u'llah and 'Abdu'l-Baha? Almost invariably I got as an answer the Guardianship. This is wrong. I made the same mistake when I was asked this question for the first time. The correct answer is the Administrative Order.

If we reread the Dispensation of Baha'u'llah we can notice that Shoghi Effendi divided it into four parts. The chapter on 'Abdu'l-Baha is followed by the chapter on the Administrative Order. The Guardianship is mentioned as one of the Twin Pillars. "These twin institutions of the Administrative Order of Baha'u'llah," writes Shoghi Effendi in the same chapter, "should be regarded as divine in origin, essential in their functions, and complementary in their aim and purpose. Their common, their fundamental object is to insure the continuity of that divinely-appointed authority which flows from the Source of our Faith, to safeguard the unity of its followers and to maintain the integrity and flexibility of its teachings. "

If the implication of the above statement of Shoghi Effendi did not sink deeply into our consciousness it is understandable. The other pillar, the Universal House of Justice, was as yet unborn. The Guardian had, at times, to fill the functions of both. Our assemblies were still in an embryonic state. We really tried not to disobey our assemblies. But such a passive acceptance was in no relationship to our positive and often passionate loyalty to the Guardian.

We do not know at present how the Twin Pillars will evolve in the future. What we do know, however, is the fact that we have to prepare ourselves in our heart and mind to establish the same organic relationship with the future Universal House of Justice as we had established with the first Guardian. We shall need time, prayers, and meditation to accomplish this.

Furthermore, with the election of the first Universal House of Justice, we shall receive for the first time in human history infallible guidance from a group instead of an individual.

Spiritual assemblies, whether local, national, or international, represent a new type of leadership. An assembly's influence on a community is different from the impact of a leader's personality. An assembly can never address a community with the natural voice of a father's "my children."

Apart from the station of Baha'u'llah as the Manifestation of God, and 'Abdu'l-Baha as the Center of the Covenant, Their personal lives will always remain sacred and beloved to the believers and will continue to be an inspiration for the formation of character. Nevertheless, we can already detect that Baha'i emphasis, in contrast with that of early Christianity, rests on the World Order of Baha'u'llah rather than on His personality, and on His ideas rather than on His pictorial likeness. The shift is from personality to idea, from father to assembly.

The ascendancy of assemblies will not replace or weaken the influence of the individual. The efficient and harmonious working of an assembly presupposes a community of mature individuals. But since the degree of maturity is relative and constantly evolving, the personal impact of a teacher or Hand will always be needed.

When a community is mature, not only in a physical sense, namely that each voter is over twenty-one, but also emotionally and spiritually, the assembly's decision is accepted as the ultimate good for all. The bond that ties the Baha'i voter to his assembly is deeper and different from that of any other voter in relation to his government. When a Baha'i votes he is performing a consecrated act of his Faith, and when an assembly consults and reaches a decision it does so in conscious affirmation of their common Faith in Baha'u'llah. In such a relationship, when the Grace of God is evoked, the impact of human personality is out of place. The shift thus is inevitable from personality-centeredness to idea-centeredness, from immaturity, with all its vanities, to maturity, with implications which we cannot as yet fully understand.

"All created things" writes 'Abdu'l-Baha, "have their degree or stage, of maturity. The period of maturity in the life of a tree is the time of its fruit-bearing . . . in the human kingdom man reaches his maturity when the light of his intelligence attains its greatest power and development. "

More than twenty years ago Shoghi Effendi wrote: "That mystic, all-pervasive, yet indefinable change, which we associate with the stage of maturity inevitable in the life of the individual and the development of the fruit . . . must have its counterpart in the organization of human society. A similar stage must sooner or later be attained in the collective life of mankind . . . and endowing the whole human race with such potentialities of well-being as shall provide, throughout the succeeding ages, the chief incentive required for the eventual fulfillment of its high destiny."

One test of our maturity is when we, as members of our community, recognize that the spiritual assembly's decision is our decision, its judgment is our judgment, and its will is our will.

When Shoghi Effendl passed away, many Baha'is felt that they had lost a father. Shoghi Effendi never alluded to himself as our father; on the contrary, he signed himself in thousands of letters as "your true brother." Instead of leaning on him as on a father, he wanted us to tell him as to a brother: "Here am I. You can count on me."

From now on we have no other choice. All we can say from now on to Shoghi Effendi, and to 'Abdu'l-Baha, Who preceeded him, and to Baha'u'llah, Who is the source of it all: "Here am I. You can count on me." ( Baha’i News, March 1960)