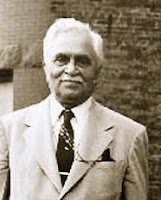 The Baha'i concept of God is that of a Supreme Being - of course, the language of man is inadequate to describe this great reality that we call God. All that we can speak concerning God is of the Manifestations of God's attributes; but as to the inner nature of God, Rumi, the mystic poet of Persia, 800 years ago, said: "How can you, O Philosopher, dare fathom this fathomless ocean? This is a Path that none could travel by meditation or contemplation. Man can no more fathom the essence of that divine Reality than a slip of straw could sink to the depths of the sea."

This shows the impossibility for the mind of man to comprehend the Invisible Essence, as for a wisp of straw to reach the bottom of the sea. Well, then, how are we to recognize and to know God?

The answer is that man can know God only through the Manifestations of His Names end Attributes in this visible world. For example you find the skies and the seas and of the earth, and the passing of the seasons, - phenomena manifesting forth life's various phases. Life finally ends in what seems to be a state of death; and then again, when the first season of the New Year comes around, you see life anew emerging from what appeared to be extinction, manifesting itself anew as does nature pregnant with blossoms, beauty, and delicious fruits.

This enables man to realize there is a Supreme Power in nature of which we shall ever remain ignorant, but without which these manifestations, and these changes and chances, which are ever recurrent, would never reappear. This leads great artists, the greatest thinkers and philosophers, to berate a man of religion who, despite the panorama of wonders spread before the eyes of man, still believes that the greatest power of God, regardless of man's limitations, is only manifest in man. Thus, one believes that the greatest majesty and the fullness of God's glories, nay, all the attributes of power and might from the Invisible Essence is made manifest through man.

The poet says: It is enough to pass through the world of nature, and with every step discover phenomena vibrant with the spirit -- with the presence of that Supreme Being. That is what the man of science, the student of nature would say -- he who would call it great folly to dwell upon the teachings of a Faith which teaches that only through a particular individual called a Prophet, the greatness and the glory of God and the essential meaning of the Divinity -- and its highest attributes --could be attained.

Now, let us see what Baha'u'llah teaches about this. Man of science, the poet or philosophers call the search for God in nature and in all the departments of the world of phenomena, in all its phases -- its changes and transformations -- the highest and the most rewarding enterprise.

In the teachings of Baha'u'llah, the fullest and deepest truth in search for God, which even convinces the doubting nature worshipper and skeptical philosopher is that what the people of religions call the historical God is the same as God in Nature. For the highest expression of Divine Attributes is found in man, the most perfect embodiment of Divine Attributes reflected in the World of Creation. We can, therefore, demonstrate that God in Nature is the same as God in History, but it is God in History Who has always trained men to establish great civilizations am to perform great achievements. It is He who has founded the Seven Great Religions of the world which have blessed men with the most productive end fruitful knowledge of that Supreme Being whose worshippers recognize him as God in History.

To explain further, we should remember that from God in History, who inspired the founders of great civilizations and endowed men with great gifts, emanate the inspiration which caused men to produce great paintings and masterpieces of art and to achieve the discovery of the mysteries of the world of nature. In other words, it is proven by history that even the knowledge that the worshippers of God in nature - poets, scientists, philosophers -- attain, concerning God, was revealed through the Manifestations and the Prophets whom we look upon as the channels through which the highest wisdom and knowledge of God is made available to men; and that it is through them that a climate of peace and civilized life was furnished in which scientists, philosophers, and the poets - worshippers of God in Nature - could produce their work. God's prophets provided the leisure and the opportunity, under a state of law and of order, without which man could not have discovered the mysteries of nature and finally achieved the discovery of atomic power, a discovery which has revolutionized human life. Those Divine Teachers have enabled man to fly in the air, to communicate without wires; to navigate the bottom of the seas. They have today invented missiles which could hit a target, unattended by a human operator, 2000 miles away and perhaps more.

Despite all these, we say to the worshippers of God in nature, they could not have solved these mysteries had it not been for the atmosphere of civilized life created by the Prophets - the Manifestations of God in history -- who have spoken to man through these Seven Great Religions of the World, who foretold the Advent of Baha'u'llah.

With these proofs we convince every man of science that -- unless he is too proud, he must believe such things could be made possible by a man alone, either in the desert of Egypt or by another born in a manger, or still by an Arab who could not read or write… It is very difficult for a man to experiment in the world of nature in search of her laws to credit such world dispensations to men of this type, but logic which traces silk to the cocoon, or the sweet honey to the bees, can in the Revelation of Baha'u'llah trace all great human achievements to the influence of Divine Religion.

For instance, in the world of nature all planes [kingdoms] are not alike. There are lower ones, higher ones and middle ones. But, taken by and large, the first is the mineral plane and then the vegetable, the animal, and the human plane. The highest expression of the Creative Energy in the mineral plane is the crystallization of the glass which causes this substance to reflect light and even generate fire when exposed to the rays of the sun.

Our further search in the world of nature brings us to a higher one, the vegetable kingdom. In it the materiality of the mineral plane is found and in addition another phenomenon which philosophers call "Virtue augmentative". This power of increase turns a handful of grain into a harvest. This is the highest expression of creative energy -- in that plane. Another is the animal plane, in which both the mineral and the vegetable properties are found, but an additional phenomenon in the animal plane is the power of instinct which was absent on the preceding planes.

It is instinct which sends the squirrel to search for nuts and for holes to store them in against the rigor of winter. And it is the same phenomenon that once the snow of winter covers the fields sends the squirrel to recover the nuts from their hiding place. The power of instinct differs from the power of reason, for although on its face it generates action which resembles the act of reason, it is in reality fortuitous and not due to conscious acts which lead from preliminaries to a conclusion.

But in the kingdom of man reason is king. It performs conscious acts. Man in his infancy and early childhood shares instinct with the animal, but in his progress towards maturity man knows what he is doing. For example, when he is laying a foundation he knows he is going to build a house, a house for which he also provides rocks, timbers and cement, and sees that the process of building leads to a conclusion. This, therefore, establishes the fact that man is the highest pinnacle in God's creation and his powers transcend all the wonders in the phenomenal world. In him all the preceding kingdoms are represented, but reason in him is a special aspect of his creation. There is, however, one difficulty, and that is that all men are not alike nor do all manifest the same powers. The seeker in the world of nature who finds God will therefore have to set out and renew his search in order to find the highest and most powerful Man.

Average men including empire builders, teachers, and discoverers are all found to be working with tools in order to produce result; and, even as history shows, the results are not beneficial or enduring. The world’s conquerors left no results which after their own disappearance did not succumb to the impact of time. As for men of knowledge, the knowledge they attained was through the medium of schools and teachers and the wealth they acquired was the result of forced charges imposed on unwilling taxpayers. But, our seeker was fortunate to find a class of men shining as scintillating stars on the horizon of history. Men who manifested the deepest wisdom and knowledge without the aid of human teachers; who built divine edifices without earthly materials; marked epochs in which humanity attained the highest bounty as a result of their beneficent deeds. They had no thought of themselves, but their aim was to clothe man in the raiment of God and cause them to manifest divine attributes in dealing with one another. Where did their power come from? All the material which they used in building up their world, all the wealth of wisdom which gives permanence to their edifices of human glory, came from God, the Creator of man, who chose them to be the bearers of His Message for the uplift of man and the harbingers of glad tidings to the afflicted humanity of their times.  We, who believe in Baha’u’llah, consider each of them the divine leader in history, and their work endures for many a day. For, to a true seeker of God in nature, the most powerful manifestations of God in nature find their apotheosis in these prophetic Lords in fulfillment of those prophecies revealed in the Seven Great religions of the World.

God has today manifested Himself in the fullness of His transcendent glory – in the Revelation of Baha’u’llah.
- Ali-Kuli Khan  ('Spontaneous Talks', Sunday Morning Classes, 1956]