Question: What is easy familiarity? – from a talk by Peter Khan, 1984 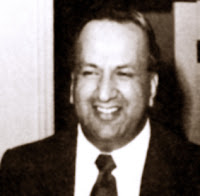 [Transcribed from video tape at Hawaii Summer School 1984, from a question asked]

“The practice of indiscriminate kissing and embracing involving unrelated people of opposite sexes is not desirable, and discouraged. Particularly these days when restraints are being abolished one by one, the Baha'is should make efforts to uphold in their personal lives and in their relationships to one another the standards of conduct set forth in the teachings." (Shoghi Effendi, ‘Advent of Divine Justice’)

I'm mentioning this because in my country, in living in Australia in years gone by, there was a view propounded that kissing in the Baha'i Faith was forbidden. This created a great deal of controversy and antagonism in the Baha'i community, many hot feelings were expressed, one by the other, and things became polarized. Eventually the whole thing was dampened down and we got some degree of rationality to the thing, by calling attention to the fact that these are the words of the Guardian and that you decide for yourself. If you think it mean prohibited, O.K. , lots of luck, you behave that way if you want but don't force others to behave in that way. If they want to come to that conclusion, fine, but it is important not to read too much or too little into the Writings, rather to see where the Writings go.


The next passage (in the letter) is to the British Baha'i youth. The British Baha'i youth wrote to the National Spiritual Assembly and the House of Justice and said that it was difficult to live up to the Baha'i standard. They said they feel the need for specific instructions on which intimacies are permissible and which are not. (The question was raised yesterday, how far can Baha’is go before Marriage?) The House of Justice replied: “We feel it would be most unwise for a Baha'i Institution to issue detailed instructions about this.” Fairly strong language, for the House says, 'most unwise for any Baha'i institution to issue detailed instructions.' Notice we are referred in this area to moderation, and we are not referring to the prohibition of the detailed instructions.

The House went on to say, "the Baha'i youth should study the teachings on chastity and with these in mind should avoid any behavior which would arouse passions which would tempt them to violate.” It sets us a sort of guideline in deciding what acts are permissible to them (the youth) in the light of these considerations, the youth must use their own judgment, following the guidance of their conscience and the advice of their parents.

Let me ... comment and then I'll read one more paragraph. Notice that here we are getting some advice as to bow to go about deciding on parameters. Is it the sort of behavior which would arouse you to go too far, knowing that sexual relations outside the marriage are contrary to the Baha'i teachings; would it arouse you to go too far?

There are a lot of people who underestimate their ability to control themselves, so this is something that one has to begin to understand about one's self. They (The Universal House of Justice) also said there are certain guidelines to use further to making such decisions:
1.            Use your own judgment,
2.            Follow your conscience, and
3.            Follow the advice of parents.

On one hand, this is very wise as it leaves it up to us and gives us the responsibility. On the other hand, it is a very hard thing, because putting the responsibility on our shoulders means WE ARE RESPONSIBLE TO GOD TO BE VERY CAREFUL AND VERY PRAYERFUL WHEN DECIDING OUR FORM OF BEHAVIOR.

The final sentence from the Universal House of Justice was “if Baha'i youth combine such personal purity with an attitude of uncensorious forbearance toward others, they will find that those who may have criticized even mocked them will come in time to respect them. They will moreover be laying a firm foundation for future married happiness.” Here the House seems to be saying, on the one hand, personal purity, on the other hand, uncensorious forbearance towards others. Uncensorious, meaning not criticizing, not condemning, forbearance, acceptance of others or compassion. This arose from the fact that the Baha'i youth in the United Kingdom were saying that people were mocking them, saying that Baha'is are squares.

If you combine these two things, not being critical and not censoring non-Baha'is who are doing all sorts of things, you will find that the people who are criticizing you or mocking you, will come in time to respect you. And the House closes with this real cruncher. “They will, moreover be laying a firm foundation for future married happiness.”

There is one more passage that I want to refer to from the House of Justice to the United States, published in the National Review, July, 1969, where the Baha'i youth of America wrote the United States National Spiritual Assembly, and the view they expressed to the Universal House of Justice was that the Baha'i youth are confused, are pleading for guidance in simple, clear language, on how to meet daily situations particularly those involving sex. Very natural, we are confused, please give us simple, clear language, on how to meet daily, the situations involving sex.

Now, the House replies: "It is neither possible nor desirable for the Universal House of Justice to set forth a set of rules covering every situation." I thought that was extremely significant. Why? Because, and as I mentioned before, my background is that of Islam, and in Islam they did not have an infallible body such as the Universal House of Justice so they fell into the trap the House is avoiding. In Islam it says, if you fast for 29 days, (lunar month) from dawn to dusk, and you were excused under certain categories which are similar to the Baha’i categories, for instance, a traveler. Great books have been written defining a traveler; if you travel this way, if you travel that way, if it is hot, if it is cold, if you are young, if you are old, if you go by water, if you go over the land, etc., if you ride a camel. They tried to define everything into a specific set of rules and came up with vast books on that one point, and similar books on other points.

So, it is interesting that the Universal House of Justice is setting the tone for the future development of the Baha'i society and the Baha'i civilization by saying that it is neither possible nor desirable to set forth a set of rules covering every situation. “Possible” is obvious. There are only 24 hours in one day. They would have to pray constantly during the day and set rules about this and about that, day after day. But “desirable” is the significant word; it is not desirable to set forth a set of rules covering every situation. That is very significant. They went on to say that it is the task of the individual believer to determine what his course of conduct should be in relations and situations which he encounters in his daily life. If he is to fulfill his true mission in life as a follower of the Blessed Perfection, he will pattern his life according to the teachings.