Education of Children -- an interview with Hand of the Cause Mr. Furutan, April 1953 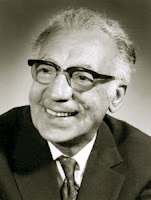 Question: How can we teach values to children?

Mr. Furutan considered this a very important subject. He clarified the question by saying that this implied how to bring eternal values, not found outside of religion, to children.

"Only teach through parables and stories," he said, "like Jesus Christ." "Those that will reach the mind of the child."

In ‘Some Answered Questions’, ‘Abdu’l-Baha said, ''Wisdom must be limited to the mentality of the hearer." Mr. Furutan also reminded us of the stories in the Bible where Jesus refers to the Kingdom of God as being like a mustard seed, and the enemies of God like dead bodies. With these two He compared the right from the wrong. Mr. Furutan reiterated how Jesus used the language of the farmer and the home. He told us that Jesus used the familiar language.

In teaching these eternal values we must make use of similes that can be comprehended, such as the one of the sun and the manifestation, and the one that the faith of God is like a fountain that cleanses and purifies.

Mr. Furutan told us to recall the story in the Tablet to the Son of the Wolf when Baha'u'llah refers to His own intimations of prophethood and a maiden. How, as He was falling asleep, a feeling rushed over Him like a flood from head to foot similar to a waterfall.

"We must create a new terminology", said the Hand of the Cause." “Anyone with the talent and the time should glean stories for this use from the Holy Books." He has done this in Persia and will send us the books in order that we may translate them. Some of the methods he uses with his classes are: In teaching Bounty and Grace. He asks, "What makes us see?" They answer, "Light." "If you turn off this light can you see? You have your eyes, why then can you not see?" He then tells the students, that in this same manner if God removes His bounty from us, our souls cannot see even though we have physical bodies.

Mr. Furutan gave another example. He puts a rose in front of the children. Then explains that this rose has an innate capacity to grow by itself; however, it cannot grow without the sun. The bounty of God is like the sun, it makes things grow.

With this example, he teaches older children about administration: There is a fountain here, and we are standing at a distance from it. How can we get the benefit from the water? We must build a canal to bring it to us. If we throw dirt into the canal the water will become muddy. Our own opinions and the things which we do that are wrong are like throwing dirt into the water. They block the passage. "We have to search for examples like these," said Mr. Furutan, "from life, to bring out the meanings of abstractions." He referred to the time when Jesus spoke of when He was in Heaven, and again reminded us of how Jesus used only the terminology that was comprehendible to the child mind of those days.

Mr. Furutan told us that the teachings of Morality are based upon the tablets of Baha'u'llah, Abdu'l-Baha and the Guardian. He quoted from the writings of Baha'u'llah, the essence of which was: in the beginning, in the school, the main thing to instruct the children in, is the conditions of religion and the teachings of God, until the promises and fulfillments of the verses mentioned in the Holy Books that would prevent the people from believing, have been fulfilled.

The child must realize that God is the power that instructs him, and he must be aware of the ever-presence of God so that he may follow the commandments. In all schools the beginning must be in religion. The focus should be such that the child will realize that God is at all times observant of his actions. This must be the force that underlies all education.

It was quoted from the Arabic Hidden Words "The presence of God is the essential thing in all knowledge." The Speaker went on to say that "in the future each city will have a House of Justice. When the members present themselves within that meeting, they must realize that they are standing in the presence of God. They are always being watched by God. In this same manner, we are always in the presence of God. The attitude of the members of the House of Justice must be such that they realize that God is watching there. "Imagine not that the secrets of the heart are veiled. They are illumined and evident," Baha'u'llah said.

This must be the spirit motivating Baha'i Children's training. Mr. Furutan went on to say that the difference between Faith and Law was this awareness of God. Laws may be gotten around by methods such as bribery, but religion prevents the crimes that are visible and invisible. Religion is such that in the sacred loneliness of the heart, one can see the power within that is watching and moving one. In Persia as well as in America, the main goal is to direct our arrows to this focal point of feeling His Holy Presence. This is a very difficult job, and that is why Baha'u'llah has made provision for teachers to receive a portion of one's inheritance. Mr. Furutan told us further, that once the teacher has attained this feeling of His Holy Presence then the teacher must devise ways and means of conveying it to the different age levels.

He gave us some examples of how he does this with some of his children. He proves to them that Baha'u'llah, Abdu’l-Baha, and the Guardian are aware of the secrets of their hearts. Mr. Furutan has written down the stories told by old Baha'is, and these told by the Guardian, and others, and these he relays to the children. Stories like this one:

After telling this story Mr. Furutan would ask the children "How could ‘Abdu’l-Baha read these quest1ens that were in the trunk?" Then they begin to think. If ‘Abdu'l-Baha, who is created by God, knows so much, how much more does God know. When you think, talk, take a step, ‘Abdu'l-Baha knows everything you do.

Another story Mr. Furutan tells is of a Muslim priest who became a Baha'i. The Baha'is one day found him drinking liquor. They asked him why he was doing this. He answered them that it was of no importance, he had been doing it for a long time in secret. They told him, ''When you drink the Muslims will say that you have been doing it only since you have become a Baha’i." The Priest replied, "I will do it so secretly that no one would know." "Does not Baha'u'llah know?", the Baha'is asked. "I became a Baha'i to forget these things," said the Priest.

Some time later he went on pilgrimage to Akka to see Baha'u'llah. When he came back, he had stopped drinking. When asked how this had happened, he replied, "I now know that He knows," and he related this experience to them:

One day he was sitting in the presence of Baha'u'llah as He walked back and forth. The priest thought to himself, "It is all right for Him to say that He is a Manifestation of God, but how can He say that He has revealed all the Holy Books?" At that moment Baha'u'llah returned to where he was seated, put His hands on the priest's shoulders and said, "Yes, We have revealed all the Holy Books."

Thereafter the priest thought: “If Baha'u'llah can read my thoughts, He must be able to see my deeds too.”

“There are many sources available to us for these illustrations," said Mr. Furutan. "They can be found in St. John, Isaiah, the Prophets of Israel, the Imams of Prophet Muhammad, the prophecies of various Holy Books that came true hundreds of years later. Think of the references to Germany in the Kitab-i-Agdas. It was revealed at the height of Germany's power in 1868, and it foretold Germany's downfall. At the time it was revealed, non-Baha'is thought it was nonsense, but today it has come true."

Mr. Furutan quoted from Nezami, a Persian poet, who said, "O, you who are a great man! If you want to do something evil, if you see a little child watching, you will not do it. Is God who created the Universe, less important than a little child?"

Mr. Furutan's parting words were: "Teach from the Holy Tablets."